Movember and the Genesis of the Nutty Chronicles 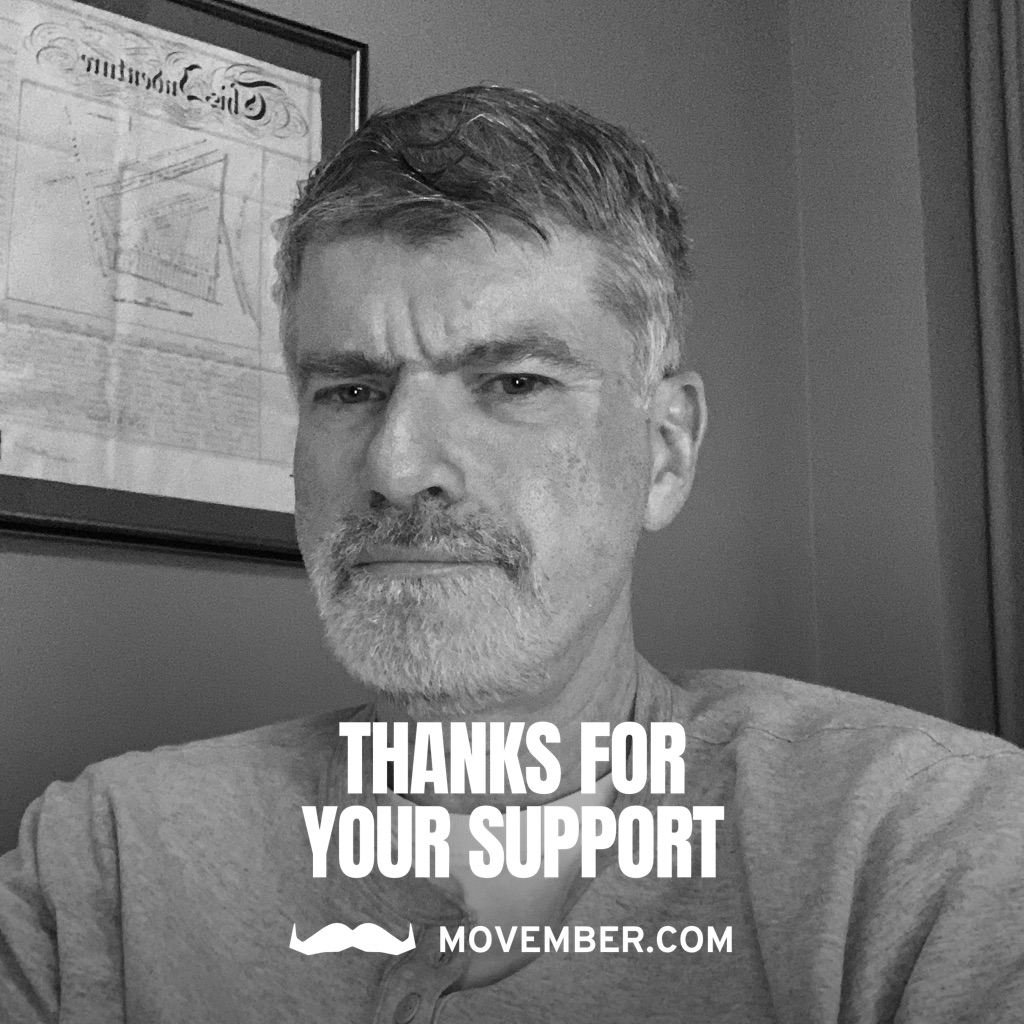 I'm often asked by listeners as to what caused me to create a podcast detailing the history of my family and the Ireland they lived in. In truth there are a number of reasons and steps that led to the making of The Nutty Chronicles. However, I can point concretely to a specific point in time which triggered this whole effort.

Every year, I participate in Movember which is a charity which seeks to raise funds for a variety of men's health issues. Last year I attempted to kick it up a notch by writing a fundraising email to friends, family and colleagues about the health issues my Dad, Fred Nutty (1925 - 2012) faced in the course of his life and how Movember might help reduce the likelihood of those same conditions playing out in other men's lives. I subsequently created a blog version of this email which you can find at the end of this post.

If you enjoy the podcast, will you consider contributing to my Movember fundraiser by clicking the following link?

Thankfully people responded favorably to that email and I had my best Movember fundraising year ever. The post also encouraged me to try writing more extensively on my family. I'd done a lot of genealogical research over the prior decade and while I found my research revelations to be fascinating, nerd that I am, I realized that there is a much richer and more interesting story that can be cobbled together using the bare facts which would help family members understand our shared origins in a more interesting way. So I began initially with a blog on Medium.

By February of this year, I decided to turn the blog entries into a podcast, figuring that would give busy readers another way to consume the posts. I was gratified that people, other than my family, received the podcast warmly which continues to incentivize my efforts and I look forward to continuing production of episodes which will reveal the lifes of my unremarkable family and the extraordinary times they lived through.

My Dad's birthday, November 17 coincides with the Movember effort, so as I grow hairy this month I think of him and other family members who went before me so that their struggles will not be forgotten

For those that have crossed paths with me in the flesh recently, you’ll notice I’m starting to get hairy. Every Movember, for the past 4 years, I’ve raised money for Men’s Health issues in the memory of my Dad, Fred Nutty, whose birthday is conveniently: Movember 17, 1925. My Dad died on March 7, 2012 at the age of 86. I’ve little doubt that he’d be still with us now at a venerable age because he was so engaged and stimulated by the wonder that is life. Unfortunately he didn’t take very good care of his health and so I hope this piece might encourage better self-care 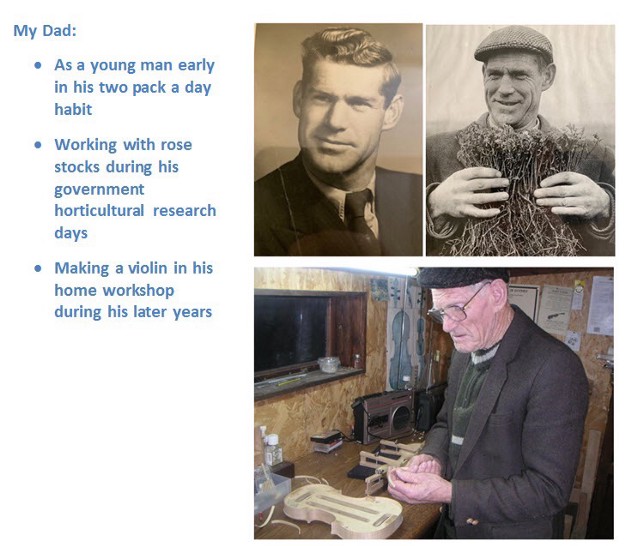 My Dad’s 50 year, two pack a day habit, led to a heart attack in his early 70s. Not the usual short sharp left arm clutching type of the movies, but a slow rumbling extended affair that went on for hours. He was well aware of the dangers of smoking, but in typical Irish devil-my-care attitude, he shrugged off the dangers until he experienced this unimagined pain. He quit the ciggies cold turkey that day, later telling me: “I never want to feel that kind of pain again”. For the next 15 years he took an increasingly complicated cocktail of medication to deal with the damage done to his heart. He often remarked afterwards what a fool he was for smoking.

Late in the decade of the aughts, my Dad ended up in hospital for colon surgery. A major tumor had been located. As you may know, colon cancer risk factors include smoking. Whether that was the proximate cause of this health crisis, can never be known. Frustratingly, he later confessed, that he had been symptomatic for months before he finally went to the doctor. Like many men, Irish or otherwise, he viewed a visit to the doctor as a gross inconvenience from more pressing matters. As many know, early detection of colon cancer is paramount in determining a positive outcome. I couldn’t understand how he had willfully managed to ignore the multiple episodes of pressure pain he felt in his gut at night, which had led him to this major surgery. Despite, the gravity of the situation, my Dad made a good recovery. The doctors informed us that the cancer had been removed and they had got it all out. Frankly, I was skeptical, given the late detection stage; I thought the chance of metastasis was high.

A few more years passed and then in 2011, my father’s health fell off a cliff. He was diagnosed with lung tumor and in short order, his cardio function deteriorated. Given his age, his doctors advised him not to pursue aggressive treatment, advising that cancer moved more slowly in older patients. I expect, they questioned whether he would survive the brutality that is chemotherapy. Ultimately it was not the lurking lung tumor that led to his demise, rather the slow deterioration of his heart function accelerated. The last months were difficult to watch especially at a distance from New York. Doctor visits turned into hospital visits of increasing duration. His weakened heart led to a periodic buildup of fluids, pulmonary edema, which could no longer by consistently regulated by medication.

In February 2012, he came home from his last visit to the hospital. I believe he knew he was dying but never acknowledged the fact, preferring to be at home still trying to do the things that he loved. Late in life he had become a luthier — violin maker for the uninitiated. In his last days, I visited from New York and helped him finish the violin that would be his last.

Towards the end, we went for a drive to the Hill of Howth which overlooks Dublin Bay, the playground of his youth. He had climbed the nearby cliffs, searching for birds’ eggs and fished the swirling waters at the Bull Island Wooden Bridge and then there was the day that he had caught a huge flounder at Dollymount Beach and brought the catch home to his parents in Clontarf. Rather then eating the fish, they had flogged it to the fishmonger, money was hard to come by during the World War II years

He recounted these and other well-worn stories maybe fearing, I think, that I’d forget. On the way home, I took him to a small quiet pub for what was to be his last pint of Guinness. Always circumspect in his drinking habits, he rarely had more than one at a sitting, he relished every drop. I doubt the brew played well with the medication slowly pulsing through his weakened system, but watching him take a deep pleasure filled draught was an indelible moment. His face a mixture of satisfaction and relief as a moment of normalcy was returned after days of illness driven indignity.

I could tell that his time was short and soon after I returned to New York he died surrounded by his family in the home that he loved. His ashes now lie beneath a Trinity Birch, one of the many rare trees he had cultivated during his long career. I’ve yet to visit the white barked tree whose roots now cradle his ashes… someday…

My Dad, was no angel, like many talented and brilliant people, he could be difficult to deal with. Getting between him and his intellectual pursuits could yield sour reactions. He was an exceptional horticulturist working for both the Irish government and setting up the family nursery business. Not only did he have an encyclopedic knowledge of plants but he spent his life expanding his domain of knowledge in other areas: tropical and cold water fish, aviary birds, bee keeping and finally violin making. He pursued all these interests with a dogged joie-de-vive which I attempt to emulate to this day

So this Movember, I’ll grow a little hair on my face in memory of my father and hope that my small efforts might encourage men to avoid foolish health choices and to go see their doctors in a timely fashion